You are here: Home / Uncategorized / BC Standout Mark Fizulich: You will be missed 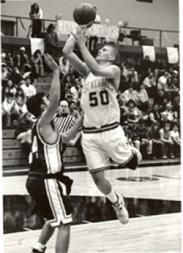 We are so sorry to announce that Billy’s former teammate and friend Mark Fizulich passed away this week after a long battle with leukemia. Over Billy’s basketball career, Mark was the most competitive teammate he ever had. Even with a relentless will to win, he always had a smile on his face. Mark, you will be missed, and never forgotten. “50”

Mark Fizulich was an easygoing kid who played a gritty brand of basketball for Bergen Catholic High School.  His numbers said it all: The clutch-shooting guard from Harrington Park averaged 18.2 points, nine rebounds and two steals a game as a senior in 1992-93. The 6-foot-5 Fizulich, a first-team All-Bergen selection his senior year, was an intense player with quick moves and an effective three-point shot.

Diagnosed with acute myeloid leukemia in late 2005, Mark battled the illness with the same tenacity he displayed on the basketball court. Sadly, on March 9, 2008, Mark passed away after an epic fight. He was just 32 years old.

Welcoming the newest member to the Hoop Dreamz fam

AN UPDATE ON WINTER TRYOUTS! Tryouts tonight have

No school doesn’t mean a day off, come improve y

Congrats to our Hoop Dreamz Varsity and HD 8/9 te

Tryouts are around the corner! Boys 3rd-12th Grade

Check out @bccrusaderhoops highlights from their w